Making sense of the Variant

En 15907 provides a very general definition for the optional Variant entity. While the decision about when and how to use this decription level falls into the domain of cataloguing, some semantic clarification will also be needed at the level of metadata modelling.

Here are some cases that may require more guidance than what is given by the current definition of Variant:

Case 1: A Manifestation not belonging to a known Variant

If little or no information is available about the content of a manifestation, then it may be impossible to decide if it belongs to a known variant.

Working from the assumption that if the Variant entity is used, then is should be applied unequivocally throughout a filmographic database, we may arrive at the following solution: 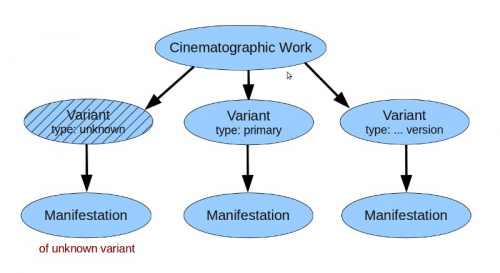 Considering the fact that the Variant entity is defined as an optional description level, we may instead prefer the following construct: 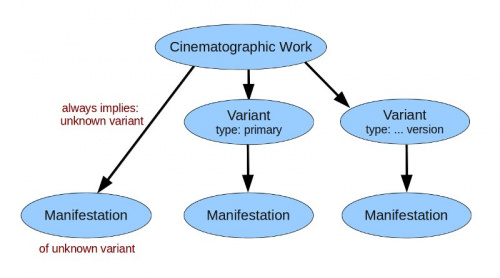 Several film works are known where takes were repeated in order to produce more than one master negative without intermediate duplication. One such example is Spione by Fritz Lang (1928).

Another example: Shortly after the introduction of sound film, it was not uncommon to produce multilingual versions where shots were repeated with different sets of main actors. An example of such a multilingual version is Cape Forlorn / Menschen im Käfig / Le cap perdue by E.A. Dupont (1930).

The variants of these works were produced through individual editing events, which is what we would also assume in any other case where a variant is created. What we have here is a set of variants that can differ significally in artistic content while still originating from a common production event (i.e., the shooting of the film).